How To Make Money In Stocks


the book "How to Make Money in Stocks Success Stories" by Investors' Business Daily was released last month.  I was fortunate to have been the focus of Chapter 7, read an excerpt below or check out the book here

Follow the Market and Look for Set-ups and Breakouts

Randall Mauro is Portfolio Manager of Resnn Investments, LLC an investment advisory firm located in Denver Colorado.  He uses the CANSLIM method in his personal trading as well as client portfolios.

When looking for positions to invest in for our clients at Resnn Investments, I always start the process by gauging the strength of the overall market (the M in CANSLIM).  Why?  Because most stocks follow the direction of the general market and as a result, investing in an uptrending market is the safest, easiest way to make money.

Back in late 2011 the market seemed to be stabilizing after a nasty decline over the summer.  Volatility (wild price movements) was still up but settling down with less ‘whip-saw’ action as the year came to a close.  Day traders love volatility, but for longer term traders it can be deadly, so I comfortably wait during the high volatility times watching for clues that the big institutional investors are ready to be back in the market again.  The easiest way to see these clues is to look at a chart and compare the daily price movements (how long the candles are) in the past few days to price movement in the recent past (2 weeks ago, 4 weeks ago, 6 weeks ago and so on).

Looking at the Nasdaq, if you compare the prices movements in early December 2011 with the previous few months, you can very easily see that things were getting ‘quieter’ (less volatile).  This told us that we were getting close to an attempted uptrend and most likely the quarter long decline was nearing its’ end.

On December 20th, we received a Follow Through Day we were waiting on, which told us it was time to put our money to work.  That same day one of the stocks on our watch list, Whole Foods Market Inc. (WFM) moved strongly in step with the market.  Whole Foods had been a strong mover over the past year, but I felt was ready to move again after a soft consolidation.  Whole Foods is a market chain that targets the educated consumer, selling entirely organic and natural foods which is, in my opinion a ‘new’ concept.  I am a big proponent of the N in CANSLIM … and the organic movement is something that I feel is still very ‘NEW’ to the mainstream consumer world.  We had been watching it since September when it made a new price high while the market was still near the bottom of its’ correction.  When a stock is making higher highs, counter to the general market, this strong Relative Strength shows that it could very well be a leader in the next market run.

Although it was too early to enter WFM on December 20th since it was near the bottom of a cup formation, we noticed that the price/volume relationship was starting to become much more tight and controlled compared to the previous few months.  Volume was starting to dry up on the down days and subtly increasing on the up days while the price volatility (size of the candles) was getting smaller and smaller.  These are price/volume clues we like to see before a big break out. 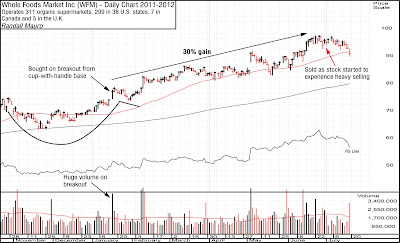 On January 9th, we saw WFM get to within 1% of its’ previous high on the left side of the cup.  The movement over the next few days gave us the final clue that we wanted to invest.  From January 6th until January 12th, the stock declined in a very controlled low volume pullback to the 10 day moving average.  There was not a panic decline but a small tight movement, and being so close to the breakout point was an added perk that showed us the stock was ready to move.  We entered a buy stop on January 12th to enter at $74.50 (5 cents over the previous high).  The very next day, although the price still did not break out we saw the final clue that we were looking for; a strong up day with above average volume which added to our conviction that this stock was ready to rise.  On January 17th our buy stop triggered and we closed the day with a unrealized profit of 3%.  Volume that day was 250% of average, exactly what you want to see in a strong mover at break out.

The next week, the stock moved up higher for a few days then eventually pulled back to the breakout price for what I like to call a “kiss goodbye”.  Although gut wrenching to watch your profits dissipate, the pullback was orderly and again, on low volume (like the previous pullback before the break out).  This orderly pullback told me this movement was nothing more than a high handle from the previous cup formation.    At the lowest point of the handle’s decline (on January 30th) the price was only 1.3% below our entry point.  The stock gained 30% over the next five months and largely ignored the correction that the general market experienced in April, May and June of 2012.

Everyone has a home run story to tell but in the investing world it is the singles and doubles that add up to real results consistently over time.  To consistently make money, you must stay focused on preserving capital and minimizing risk.  Investing when the market (M) tells you it wants to go up, and in cash when the market starts to give signs of a top are the most important criteria to remain profitable over the long run.